Index is proud to present the exhibition Simone Forti: Here It Comes, opening on 4 September 2015. The exhibition gives an in-depth insight into the practice of the highly influential artist, choreographer, dancer, and writer Simone Forti, who came to prominence in the 1960s, in a historical moment of rich dialogue between visual artists, musicians, poets and dancers. Her work developed a radically new approach to dance incorporating everyday movements and improvisation, exploring the body as a tool for experience and interaction. Forti’s work often develops in collaboration with other practitioners, including Charlemagne Palestine, La Monte Young and Robert Whitman. Here It Comes shows a selection of works from different periods and areas, with sculptures, drawings, documentation of performances and videos, including two works from the legendary series of “Dance Constructions”(1960/61) which will be activated during the duration of the exhibition by dancers, and a recent collaboration with Jeremiah Day and Fred Dewey.

Forti’s work has made a major contribution to the intersection of sculpture and performance and helped to create a sensibility for “what we know about things through our bodies.” (Forti) Her work is often noted as a precursor to the Judson Dance Theater group and Minimal art. Although regarded as one of the key figures in postmodern dance, she refers to herself as a “movement artist.” In the spring of 1961, she presented “Five Dance Constructions and Some Other Things” as part of a series organized by La Monte Young at Yoko Ono’s studio in New York, for which she presented radically new dances made up of every day movements, performed in interaction with sculptures. In the late 1960s Forti started to study animal movements that she developed into performances. In her recent work, especially the series “News Animations”, she examines how dance resonates with current events, exploring the reverberations between verbal thought, physical feeling, and perceptions of the world.

Over the past five decades, Forti has developed new models and methods of composition to address the relationship between abstraction and subjectivity, with an acute eye for the way in which politics are engrained in everyday levels of our lives. The exhibition highlights her ongoing interest in the different possibilities to negotiate social and political issues in words and movements. Forti’s work challenges performers and viewers alike to experience the motion and motivation of their own bodies.

Simone Forti (born 1935 in Florence, Italy, lives and works in Los Angeles) is a key figure of 1960s minimalist dance, examining the relationship of space and the body. She emigrated to the US with her family in 1939. In 1955, Forti started dancing with Anna Halprin, a pioneer in improvisation and working with kinesthetic awareness. In 1959, she moved to New York to study composition at Merce Cunningham Studio with musicologist and dance educator Robert Dunn, where she met and began to work informally with choreographers Trisha Brown, Yvonne Rainer, and Steve Paxton. Forti collaborated with artists and composers, including Robert Morris, La Monte Young, Yoko Ono, Robert Whitman, Charlemagne Palestine and Peter Van Riper. In the early 1980s Forti started speaking while moving, working with newspapers and doing solo performances called “News Animations,” giving expression to images, memories and speculations sparked by the news media. Forti has published several books, among them Handbook in Motion: An Account of an Ongoing Personal Discourse and Its Manifestations in Dance (Nova Scotia College of Art and Design Press, Halifax 1974) and Oh, Tongue!, edited and published by Fred Dewey (Beyond Baroque Books, Los Angeles 2003). Her works and performances were presented in exhibitions and museums in the US and internationally, most recently at the Museum der Moderne Salzburg, Hammer Museum Los Angeles, Museum of Modern Art New York, Guggenheim Museum, Sao Paulo Biennale and Louvre Paris.

A second version of Simone Forti. Here It Comes will open at Vleeshal, Middelburg in January 2016.

Events
Simone Forti will read from her writing during the opening on 4 September, 19:00

From the 1960s to Today: Deborah Hay and Simone Forti in Conversation
Sun 6 September, 16:00 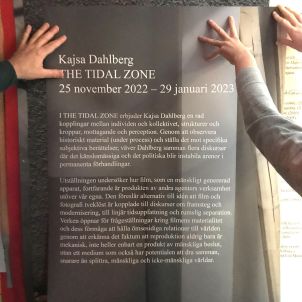